On its completion in 1935, Alvar Aalto’s library in Vyborg was regarded as one of the most significant functionalist buildings of its time. The restoration of the library, which had been in a state of neglect for a long time, began in 1994 and was completed in 2013. The restoration work has since received several awards for the exceptionally high-quality result and the laudable international cooperation.

Alvar Aalto Library in Vyborg – Saving a Modern Masterpiece, Part 2 takes off from where the previous book ended and presents in detail, through texts, photos and drawings, the individual renovation projects that were completed in 2010-2013: the lecture hall, the lending and reading halls, the children’s library, the main entrance and lobby, the basement floors, the book storage and technical systems as well as the external walls and roofs. The book’s viewpoint is very much set in the present, in presenting the recently restored library, its pure white surfaces, the soft grey soapstone on the entrance façade, and the carefully finished details of the windows, doors and staircases. The photos taken specially for the book beautifully show Aalto’s masterpiece in all its new splendour. 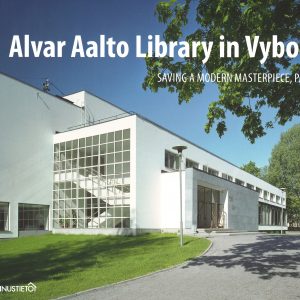