In an introductory essay, Teija Isohauta writes about Aalto’s unrealised library projects. Aalto’s libraries have served various needs. Some of them are public libraries, such as those in Seinäjoki, Rovaniemi and Wolfsburg. The libraries at the University of Jyväskylä, Helsinki University of Technology and the Mount Angel monastery are scholarly libraries. The libraries in private houses such as Villa Mairea and Maison Carré, offered a tranquil work space.

The book also describes the changes in use that the libraries have undergone. In the libraries it was important to create spaces for different kinds of functions and users. In some of them Aalto arranged the functional differences by means of combinations of fan shapes for the main library spaces together with a strict rectangularity for the work rooms. Side by side one encounters visibility and openness and, on the other hand, also sheltered and tranquil places to sit and read. Both natural and artificial light fulfil their respective purposes. Skylights and clerestory windows bring natural light into the core of even deep building frames. Natural light creates a strong positive ambience in the reading and lending halls. The individual lamps on the reading tables in turn create enchanted circles of light. Aalto felt a particular affinity for designing libraries. He himself was interested in literature and reading. Nowadays almost half of all Finns are regular users of libraries, the functions of which, however, have changed and continue to change – in addition to books, many other services have become integral parts of the libraries. 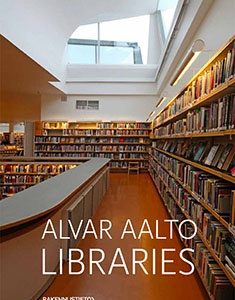