Our entire culture rests on the nature of our dwellings, stated Alvar Aalto in a lecture he delivered in Munich in 1957. During the course of a career spanning over 50 years, Aalto designed a total of nearly 100 single-family houses, apartments blocks, student dormitories and summer homes. Many of them are architectural gems, in which his thoughts about dwelling and architecture converge. Aalto considered experimental building to be very important: in his opinion, there should always be an opportunity for experimentation in every project, for it is only in that way that architecture can be promoted and quality improved for the good of the ”little man”.

Alvar Aalto Homes presents 30 homes designed by Aalto from the 1920s to the end of the 1960s built in Finland, the United States, Germany, Switzerland, Estonia and France – many of them well-known buildings but also those rarely if ever presented. Among them are the fabled Villa Mairea and Maison Louis Carré, a modest standard house built for ex-servicemen and compact apartment blocks and row houses such as the Standard terrace housing in Kauttua, Finland, the Typpi Oy row house in Oulu, Finland and the Neue Vahr apartment building in Bremen, Germany. Aalto’s own house in Munkkiniemi, Helsinki, and his summer home, the so-called Experimental House in Muuratsalo, reveal the intimate side of the Aalto family’s life as well as the endless experiments with which Aalto tested his ideas.

Jari Jetsonen’s fine full-colour pictures – many of them taken especially for this book – and Aalto’s original drawings beautifully convey the special features of each house. Sirkkaliisa Jetsonen’s descriptions of the homes are complimented by Jussi Rautsi’s essay that tells the story about the wonderful Aalto partnerships: Alvar and his spouses Aino and Elissa. The foreword to the book has been written by esteemed Portuguese architect Álvaro Siza Vieira. 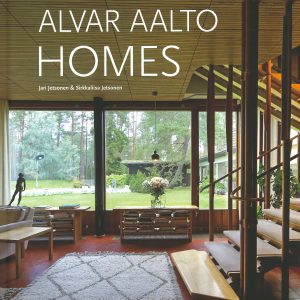